As with many places around the world, there are some key dishes that constitute an integral part of Balinese culture. These dishes can be experienced both in restaurants and hotels, as well as from the traditional food carts that dot busy streets.

Below, we take a look at 5 traditional dishes to try when visiting Bali: 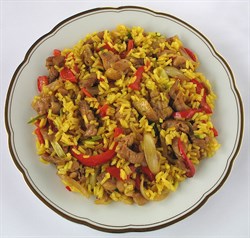 Perhaps one of the main dishes that defines Balinese cuisine and is also a favourite throughout Indonesia is nasi goreng. Having been voted the second most delicious dish in the world by a 2011 CNN poll, nasi goreng is simple but incredibly delicious.

As a result of its simplicity, it is an integral part of larger meals and it can be easily combined with other ingredients.

It is one of many strong contenders for the position of Indonesia’s national dish and it is easy to see why. It is, in its simplest form, just stir-fried rice, usually mixed with a range of different spices, such as garlic, tamarind and chilli and sweet soy sauce to lend it a unique and delicious flavour. Though there are many variations, it is usually combined or served with egg, as well as meat, vegetables and sometimes salted dried fish.

Due to its ubiquity throughout the region, visitors to Bali won’t struggle to find a good example of nasi goreng wherever they look. It is renowned for its accessibility across all levels of social class – the simplest version of this dish can be found served on tin plates from roadside vendors or from night hawkers at bustling markets, but it can also be found on porcelain in smart restaurants or at civilised dinner parties. 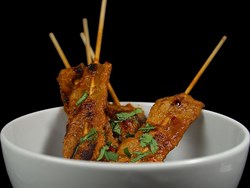 Another delicacy that is central to Indonesian culinary culture is satay, also spelt as sate. This is popular not only in Bali, but also across Indonesia and the entirety of Southeast Asia and has many parallels in other nations, such as Turkish shish kebab or South African sosatie.
Despite its widespread popularity, its origins lie in Indonesia and therefore the most authentic version of the dish can be found there.

Satay consists of skewers of meat flavoured with spices, grilled or barbecued and then served with a number of accompaniments. The skewers themselves are usually made from the midrib of the coconut palm frond or from bamboo and the meat that is placed on them varies widely, although chicken, pork and mutton are among the most common. The accompaniments for satay skewers include spicy peanut sauce, as well as rice cakes or mixed slivers of cucumber and onion.

Satay is such a versatile and popular dish that there are many travelling vendors who sell it almost exclusively. In addition, it can be found at street-side restaurant tents, as well as in high-class eateries. It is also often present at major celebrations and festivals, with the skewer design making it easy to eat on the go.

Another popular choice for visitors exploring Balinese cuisine is gado-gado. It is a widely variegated dish that is served throughout Indonesia and can work as both the main event of a meal or as an accompanying side.

It is found at stalls, from vendors and in restaurants and hotels and a dried mix is often found in shops, meaning that by simply adding water, it is now possible to try and make it for yourself.

In essence, gado-gado is a vegetable salad covered with a peanut sauce. There are numerous regional variations, the most significant of which is whether or not the vegetables are cooked or raw; both versions are widely consumed. The key difference between this and traditional Western salads is the amount of sauce used – it should thoroughly coat the vegetables and not merely act as a form of dressing. 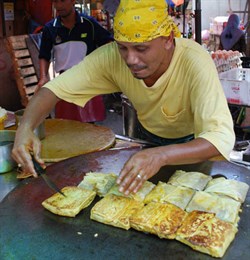 One of Bali’s most popular dishes is the martabak; it is especially interesting because it is available in both a sweet and savoury variety. Although the method of cooking and range of ingredients bear very little similarity, traditional martabak vendors will sell both the sweet and savoury versions.

The sweet variety, or martabak manis, is essentially a thick pancake with a filling, such as chocolate or banana, sandwiched between two pan-cooked buttery layers. These are most commonly cooked by street vendors in the evening. The savoury version, or martabak telur, is a crepe-like dish with a filling of egg (often duck egg) and other ingredients, such as onion, beef and seasonings. The filling is incorporated while the pastry is still being fried in the large flat woks. 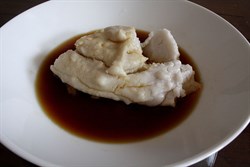 Black rice pudding, also known as bubur sumsum or bubuh injin, is another Balinese delicacy. Its sweetness means that it is often eaten as a dessert, but also serves as a breakfast or snack option too. It is often regarded as the ultimate in local cuisine for visitors with a sweet tooth.

It is a mixture of white and black glutinous rice, flavoured with coconut milk or cream, palm sugar and randan leaves. It is usually served hot and is syrupy and sweet in taste. For extra flavour, it is often garnished with more coconut cream and banana slices. The general unavailability of many of the ingredients involved, especially the black rice, in Western food stores, mean that this dish really encapsulates true Balinese cuisine.

Overall, there is much to enjoy in Balinese cuisine, whether you favour sweet or savoury, meat or vegetarian, high dining or quick takeaways. The five dishes above are a small but representative selection of some of the unique delicacies on offer in Bali.

Help Me Find My Villa

Vilondo is passionate about delivering exceptional service. We believe it’s the little things that make staying in a villa so special. Let us do the ground work for you and help you plan the perfect holiday.